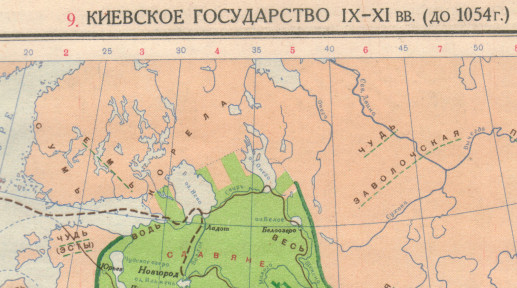 The map shows in green the northern part of Kievan Rus', medieval state which existed from approximately 880 to the middle of the 12th century. The Finnic tribes -- including заволоцкая чудь (Chud Zavolotskaya) -- that traded with Kiev are underlined in green.

Also note other tribes being already under Slavic influence:

The tribe name заволоцкая чудь which figures in the Russian Primary Chronicle has traditionally been considered the earliest Russian ethnonym of the Finnic population of the Dvina basin. This name is derived from the word волок which has been used as a designation for those places where boats were carried over land from one water system to another.

The other component of the ethnonym, чудь ("Chud") has been used of several Finnic tribes in the vicinity of the Gulf of Finland.